How To Build Your Perfect Spanish Learning Routine 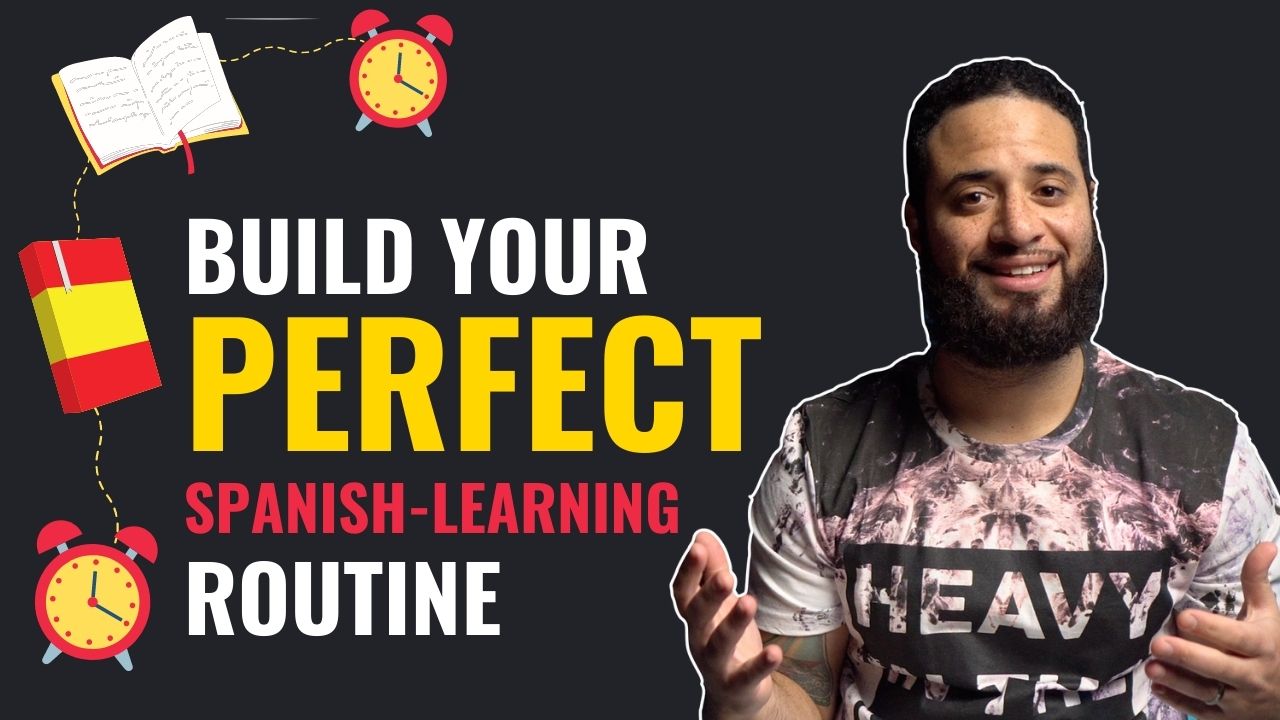 Today I want to show you my language learning routine for the New Year because I think it will help you build your own perfect Spanish-learning routine.

Recently I wrote an article about 7 ways to learn Spanish in 2022.

After publishing that article, I received some questions, asking me about my daily language learning routine.

That way you can take the information to help you create your own language learning routine.

General Overview of how to build your Spanish learning routine

For those of you who don’t know…

I speak 4 languages — 3 foreign languages plus my English which is my Native language.

For each language I am at a different stage.

For example, I have been able to speak Spanish for many years.

I started learning it when I was fourteen years old.

So right now, I am in maintenance mode.

I don’t actively study it because it is now part of my life.

I speak Spanish every day with my cousins, other family, and friends.

Some of my favorite podcasts and YouTube channels are Spanish-speaking.

And I also have this business and I make videos in Spanish.

So I don’t have to study it because it is already integrated into my life.

But I try to consume it when I can.

For example, if I have the opportunity to watch something on Netflix, I prefer to choose something in Spanish instead of watching something in English.

Just so I can keep consuming Spanish.

Italian is a bit different.

I only have two years of learning Italian.

I started in the year two thousand and twenty.

But as many know, Italian is very similar to Spanish.

They are both Romance languages.

I am always talking about consuming “comprehensible input” and—since both those languages are similar—after consuming a lot of Spanish, learning Italian was easy.

In other words, I already had a solid foundation of Romance languages input.

Right now I speak it fluently, but I don’t speak it as well as I speak Spanish.

I think I can work on my pronunciation and intonation a little more to sound more Nativ-like. the pronunciation

When I speak Spanish, many people think that I grew up speaking Spanish since I was little.

They don’t realize that I didn’t start learning it until i was a teenager.

My goal is to reach that same level with Italian.

I am a perfectionist.

And when I am learning a new language, my goal is not only to be able to communicate but also to sound authentic.

Only to not be able to speak any of them well.

For me I want to sound authentic.

And I only try to learn languages that I am really passionate about.

That’s because that’s the only thing that is going to motivate me to stay consistent.

Having said all this—for Italian I do everything that I recommend that you do with Spanish.

I do deliberate practice and I try to consume at least an hour of Italian every day.

I do it by watching videos on YouTube, for watching shows on Netflix, and for listening to podcasts.

Also every week I do one or two lessons on iTalki to practice speaking.

I have three great friends who I talk to every day on WhatsApp. That helps me a lot.

What I do to learn Napoletano is very similar to what I do with Italian.

For those who do not know, Napoletano is a language used in southern Italy.

It is used mainly in Naples, Italy.

I consider it to be a mixture of Italian and Spanish…

So I have a huge advantage by knowing both Spanish and Italian.

I have visited Italy and one of my favorite cities in the world is Naples, because of the culture, the food, and because of the language it is a very beautiful language.

But I’ll be honest…

Even with the huge advantage of already speaking both Spanish and Napoletano, it has been a bit more difficult to learn Napoletano.

That’s because it is not a very popular language.

It is only spoken by about 5 million people.

Compare that to the 500 million people that speak Spanish.

It is also a language learned in the streets.

In other words, they don’t teach it in school.

So it has been very difficult to find content in the language.

There are not many YouTube channels, there are no podcasts in Napoletano, and you cannot find videos with Napoletano subtitles as you can in other languages.

This forces me to be very creative.

My strategy right now is to watch some shows on HBO Max that are entirely in Napoletano with English subtitles.

What I do is watch them and record the audio.

I then download the recording to my phone and re-listen to it as if it were a podcast.

But some words are still difficult to pick up because, as I just mentioned, the subtitles on the shows I watch are only in English.

So I have to try to correlate what I think is being said into English.

Again, it’s a little easier since I know Spanish and Italian…

But if I didn’t know those languages it would be nearly impossible.

I also do iTalki lessons with others that helps me practice and gives me deeper insights into the language.

I try to study it for at least 30 minutes a day.

For me Napoletano is not as important as Spanish or Italian simply because it is very popular.

So I prefer to spend more time with the other languages, but I love Napoletano and I will not stop learning it.

5 Takeaways For Building Your Spanish Routine

Now, let’s cover five things you can take from this article:

If you found this article helpful and are really looking to level up your Spanish this year then check out our best-selling Seven Day Spanish Course.

Inside, we will take you on a journey that guarantees you will improve your comprehension and Spanish speaking ability.