So you’ve been studying Spanish off and on for years…

Only to never see the results that you truly desire.

Believe it or not, the reason why you are speaking Spanish like you want yet has nothing to do with your ability to learn Spanish…

But more so with your ability to stay consistent with Spanish.

When it comes to learning a language like Spanish, consistency is critical. Even if you have the best Spanish learning training in the world, you will never see results if you don’t do it.

But why does this happen? Why is it so easy to get sidetracked?

I’m not saying I have the 100% correct answer but I will give you my theory in this article.

And then I will provide you with some tips on staying more consistent with your Spanish practice.

So really quick, I want you to take a look at the image below: 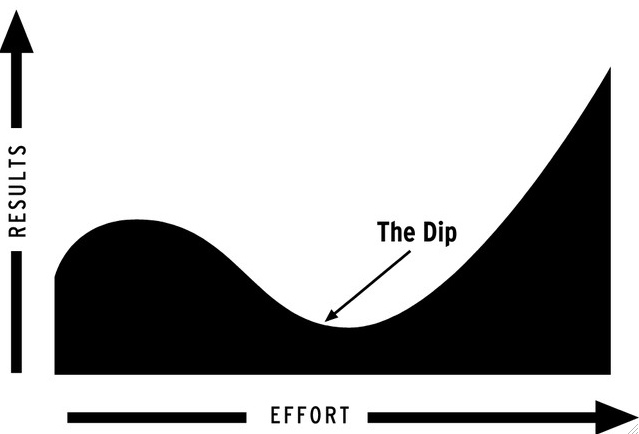 I got this image from Seth Godin’s book called the Dip.

Almost everything in life worth doing is controlled by this Dip, including your Spanish learning.

On the left, we see the word “Results.” The y-axis is demonstrating “Results” the higher we go on this y-axis, the more results we experience.

At the bottom of this chart, we see the word “effort.” This is the x-axis. So the further we go to the right, the more effort we put in.

When you first start something, it’s fun, right? This image here demonstrates why. It’s because when you get started with something for the first time, it’s easy to notice results.

Think about how fast those first few pounds come off when starting a new diet or workout plan.

But after that initial point, the results aren’t as noticeable. In other words, it gets harder to see the results you are making.

That doesn’t mean the work you are putting in is no longer working; it merely means that the results aren’t as obvious.

This is what we call the Dip.

The Dip is the long, arduous journey between starting and mastering Spanish.

People that end up becoming fluent in Spanish are the ones that EMBRACE the Dip.

How Many Hits Break The Ice Block? 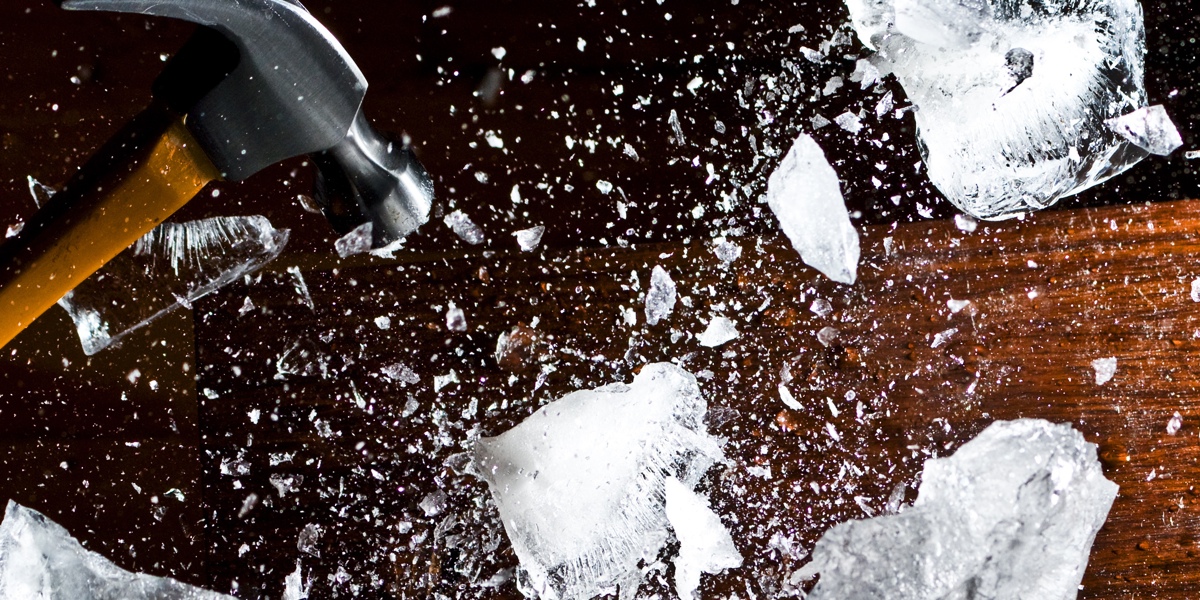 Here’s why this matters…

I want you to think about a big block of ice.

Let’s say I give you a hammer to break the ice.

How many hits would it take you to break it?

We could make guesses. But we will never know for sure.

What we do know is that eventually the block of ice will break, right?

Let’s say you have hit the ice block 100 times and it breaks on the hundredth hit.

It wasn’t that 100th hit that REALLY broke the ice, was it?

It was the accumulation of hits.

But what if you would have stopped at 99 and gave up?

You would have just assumed that the ice was impossible to break.

This is what happens to most people when they are trying to learn Spanish.

They initially put in work. But over time, it seems results get harder to come by. So they give up, not realizing they were on the brink of experiencing a significant breakthrough.

The problem is they don’t know when that breakthrough is going to be.

But we can assume that with more effort, you will bust through that Dip and come out on the other side, experiencing more results than you ever imagined.

People that end up becoming fluent in Spanish are the ones that embrace the Dip.

I remember when I was learning Spanish growing up. In the beginning, it was fun. I felt like I was picking it up fast. I went from barely understanding anything to understanding a decent amount pretty quickly.

It got complicated and it was so frustrating that I wanted to give up. I was in the Dip. But I kept pushing through. And once I made it to the other side, I was far better than I ever thought I could be. Ahora hablo bien, y no tengo problemas.

Think about any skill you’ve mastered. I’m sure it has followed a similar trajectory. It’s just that we either forget the “difficult” time or we expect learning Spanish to be different.

What can you do to push through this Dip and stay consistent with our Spanish practice?

First, you have to try to rig the game in your favor. You need every advantage possible to push us through this challenging Dip.

My first piece of advice would be to follow something called the Two Minute Rule.

In his book, Atomic Habits, James Clear says the Two Minute rule states, “When you start a new habit, it should take less than two minutes to do.”

He then discusses how any habit you want to gain can be scaled down into a simple two-minute version.

In this case, if you want to “Study Spanish” each day, your focus becomes “opening up a video in Spanish.”

What you are trying to do is make the act of training your Spanish as easy as possible to start.

You will see that once you get started, it’s easy to continue. The hard part is getting started.

His focus became spending two minutes to get changed and ready, to get in the car, and the rest would take care of itself.

Most people make the idea of learning Spanish too daunting.

It doesn’t help that they have us doing activities that bore us to death in traditional learning settings. This turns us off to the idea of showing up every day to put in the work.

But as we saw early in the Dip image, that’s one of the most essential aspects of mastery.

Of course, you know that the goal is to do more than just two minutes of practice.

The more you put in, the better. But the idea is that following this two-minute rule helps you get started (which is usually the most challenging part). From there, you continue to increase the amount of time you spend.

So whenever you find yourself struggling to put in that Spanish training, think back to this two-minute rule.

What can you do for just two minutes today that will stimulate your Spanish learning?

To make this even easier, it’s best to prepare the day before.

This is why when people want to practice healthy eating, they prep their meals, which makes it effortless.

In the same way, you want to prepare your environment or workspace for your Spanish training.

When it’s time for you to learn, there are no obstacles that prevent you from implementing this “two-minute” rule.

So to sum this up: We know that if we want to get better at Spanish, we have to show up every single day, right? We have to put in the work consistently.

Sometimes we will feel like we are in a DIP and that we just aren’t getting the results we think we should be getting but know that you have to embrace this Dip, let it motivate you to work hard.

Let it symbolize that massive results are to come. It’s inevitable as long as you keep going.

The last thing I’ll say is that showing up every day is important, but you have to make sure you are doing the right activities to train your Spanish.

That’s why I created a free training for you where I reveal my 3 biggest secrets to learn Spanish Faster. So that way, you KNOW what you should be doing every day when you are putting in the work.