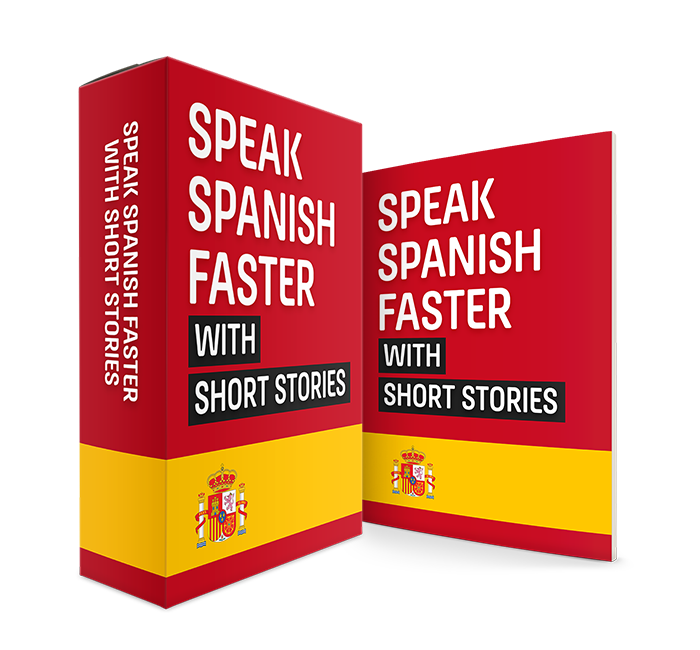 Today we want to introduce you to the ultimate shortcut to becoming fluent in Spanish.

Believe it or not, it’s Spanish short stories.

But first, you need to know that not just ANY short story in Spanish is going to help you achieve your goal of speaking and comprehending Spanish better and faster.

It has to be the RIGHT type of short story…

And it has to be read the right way.

When it comes to improving Spanish language fluency we know that reading is essential just like it is in our Native language.

By exposing your brain to the Spanish language written for Native speakers, you’ll start to familiarize yourself better with sounds, rhythms, and the rules of the language.

You’ll start to listen and look at Spanish sentences and immediately know if those sentences are correct or not.

Most students often get overwhelmed when it comes to reading.

They know it’s important but don’t do it because it’s too hard.

Staring down the barrel of a big Spanish novel can be intimidating and nearly impossible to get through.

Long, boring Spanish novels are like taking the slow bus to become fluent…

But short stories are the private jet to take you straight there in no time.

Why are short stories in Spanish so great for students?

They can be easily digested and there’s less material to break down and process.

Reading a BIG Spanish book chapter-by-chapter forces a student to build up TOO much information in their brains.

But that brings the question…

Most students simply don’t know which stories to read or even how to read them to get the fastest results possible.

Short stories ONLY provide the shortcut necessary if you choose the right texts and read them the right way.

That’s why we created  Speak Spanish Faster with Short Stories.

How This Course Works

These were handcrafted perfectly by our coaches so that they get you the best results as fast as possible.

We wanted to give you a fun and effective way to continue to learn Spanish.

You see, short stories only really provide the shortcut necessary if you choose the right texts for yourself.

If the reading is too advanced, the shortcut is blocked.

If the reading is too easy, the shortcut leads in the opposite direction.

Beginner, intermediate, and advanced students all fare better with a level that is designed specifically for them.

That’s why we breakdown our course into those three categories:

There will be ten stories for each level.

That way, we make sure we have stories for every student at every level.

That means this course will work for you no matter which level you are currently at.

We do recommend that all students start on the beginner level and progress through advanced because it will be the first time they are exposed to our reading in Spanish methods.

After you get through all 30 stories, I guarantee that your Spanish will be significantly improved and you will be much closer to your goal of fluency.

And when you combine these stories with our other programs like Seven Day Spanish, Seven Day Advanced, and Spanish-On-Demand…

You can forget a private jet because you will be on a rocket ship straight to Spanish fluency.

Here's what students are saying

We wanted to go the extra mile for you because you deserve it.

So here’s what we’ve done…

When you join today we are also going to throw in the full audio version of every single story.

That’s 30 audios to go along with your short stories.

So that way, you work on your reading and listening comprehension at the same time.

But here’s the kicker…

Some of the stories will be told with a Castilian Spanish accent, which is the traditional accent from Spain…

And others will be told with a Latin American Spanish accent.

This will help you become comfortable with the many common Spanish accents all over the world, whether in the Americas or Europe.

That means you’ll be prepared no matter who you speak to or where you travel.

This is not a long, drawn-out class that you have to force yourself to go to everyday…

But the results you get from them will be worth it!

We can assure you that there is nothing else out there on the market like what’s inside of this Speak Spanish Faster with Short Stories Course.

Remember, just like all our other courses, you are fully backed by our 100% 60 Day Money-Back Guarantee.

So you either see amazing results and are fully satisfied with your results or you don’t pay a penny.

If for any reason you find that the program is not for you, simply email our wonderful support team at email@speakspanishfaster.com and they will give you a prompt refund, no questions asked.

It’s simple, you either love the stories or you don’t pay a cent. How does that sound?

But we have no doubt you are going to enjoy them and more importantly RAPIDLY increase your Spanish fluency allowing you to speak Spanish like you’ve always wanted.

To take advantage of this offer, please click the button below.

That will take you to our 100% secure order form where you will go to complete your order.

So we highly recommend you that you take action now so you don’t regret missing out on this amazing opportunity later.

But at the end of the day, the choice is yours.

Thanks so much for being here and we see you inside the members area.

QUESTION: Can you quickly summarize what this is about because I don’t feel like reading the long sales page?

ANSWER: Sure, the Speak Spanish Faster with Stories course will help you improve your Spanish speaking and comprehension ability through personally handcrafted short stories in Spanish. It includes 30 short stories with added audios and text to allow you to practice your reading and listening comprehension at the same time. These audios will be in both Castilian and Latin American Spanish. This will help you become comfortable with many common Spanish accents worldwide, whether in America or Europe.

QUESTION: Buenos Dias Rocky, I’m excited about the stories. I have a question for you. Will the stories be spoken into English after or have subtitles or something so that I can learn new vocabulary words I don’t know?

QUESTION: Hi, any chance of getting a sample? How will I know if this is for me?

ANSWER: While we don’t offer a sample of this course, we do have a simple 60-day return policy, no questions asked. So you have 60 FULL days from the time you join to try out the program before deciding whether or not it works for you. Should you choose the course is not for you and would like to return the course, you would simply send us an email letting us know, and as long as you are within that 60-day time frame, you would receive a full refund.

QUESTION: How long will I get to access this course?

ANSWER: When you join any of our courses, you receive unlimited, lifetime access to all the materials.

If you’re ready to join click the button below, complete your order on the next page, and we will see you inside.